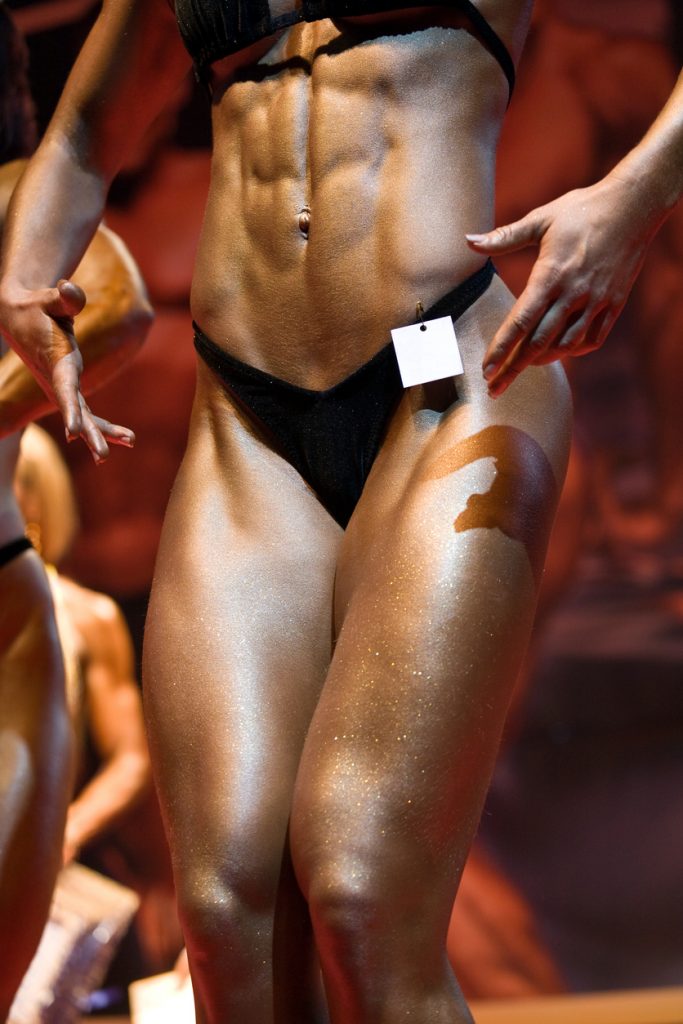 I began prepping for fitness bikini competitions in July of 2015. I thought I knew what I was getting myself into, but at the same time, was not close to being mentally prepared for it. I began my training immediately and was consistent.

Sometimes I would over-train myself to the point of exhaustion and would get sick. I quickly had to learn how to cut back and make my body rest, but I was so excited and so motivated that sometimes it was really difficult. My diet adjustments were some of the hardest changes I had to make, but because I had a set goal and was paying more for this competition than I ever had for anything else, I was going to make sure my diet was on point.

I was going through months and months of prep, dieting, and working out. Seeing the changes in my body mentally and physically was hard and it was exhausting. I had never experienced anything like this before. In the beginning it was exhilarating and fun, something new that I had never taken on before and only heard about from other girls. I had seen pictures in magazines and all over social media, but never knew about the kind of dedication, sacrifice, and work that it took. I was diving in too deep at some points, but it didn’t stop me from trying to accomplish what I had set out for.

I eventually went through three competitions in a matter of a few months. For most experienced competitors, it’s not typical to do that, but I was new at it and intrigued by the competitiveness that it took.

My first competition was great. I placed 5th and felt and looked better than I ever had. However, I was scared out of my mind because there were so many other girls who I felt looked even more amazing than me. My second competition, I was ready to work harder and dive deeper. I worked my butt off (at this point knowing when I was overtraining myself) and I changed up my diet a little.

The only problem was that this new diet wasn’t giving my body enough nutrients to perform well or even look the way I wanted it to. I was weak and tired, my skin started to look discolored, my hair started to become brittle and dingy, and internally, my body wasn’t functioning properly. I wasn’t getting in the proper macronutrients that my body needed. With this, I was also mean. I didn’t do nearly as well in the second competition as I did in my first. I was disappointed and the results didn’t reflect the determination I had when training for the competition this time around.

My whole attitude changed because I was just exhausted and wasn’t the happy, bubbly person I typically am. I learned quickly from this though. After my second competition, I was determined to try again and see what I could do by myself by learning from the past two competitions.

I signed up for my third competition and honestly was a little more laid back this time. I worked out hard, but listened much more closely to what my body was telling me. I took more rest times and days. I did research and tests on what my body felt like and looked like by trying to add more nutrients into my diet that hadn’t been there before. I felt and looked better than I ever had. At this competition, I didn’t care where I placed because I was confident in myself and the work I had put in to get to that point.

Taking Time Off & Loving My Body

After all of these competitions, I decided to take time off for a while. I knew there had to be a way to prep and compete that was better for my mind and body. The whole time I had been playing mind games with myself thinking I was overweight when I really wasn’t. I was obsessing over looking a certain way that wasn’t sustainable for anyone and wasn’t realistic for my body, and I kept comparing my body to others who I kept striving to be. I wasn’t doing these competitions for myself anymore; they became a means to influence what other people should think of me.

It’s been almost a year since my last competition and I’ve done more research and nutrition tests. I’ve done different training styles to see what my body responds best to.

I know now that when I decide to go back to compete, my mindset will be totally different. I’ve had the experience, I’ve spent the proper time testing my body, and I’ve been through all the ups and downs physically and mentally to see when things are coming. I’ll be doing it for myself only, to accomplish goals that I hadn’t set for myself before. Yes, it sounds as if this was a terrible experience. But really, it was a season of learning to be able to share with others.

It helped me become a better trainer and coach. It taught me to educate myself and that you can never stop learning. It taught me to respect my body and the effort it takes to do something like that or any type of preparation for competition. I came out of it learning more and more. You never know the outcome of something unless you try and stay consistent.